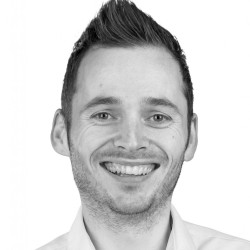 Kevin BoostenFollow Front-end developer with passion for Angular and mobile development with Ionic and Capacitor.

How I use an OpenAPI spec in my Angular projects

If you are working on a project that has an OpenAPI spec, then you can generate your Angular Code and even generate a simulator for development and test purposes. This reduces time and complexity of integrating with an OpenAPI gateway tremendously. Let me show you how I use OpenAPI to boost up my productivity!

Here is a brief introduction if you’re not familiar with OpenAPI in general:

The OpenAPI Specification (OAS) defines a standard, language-agnostic interface to RESTful APIs which allows both humans and computers to discover and understand the capabilities of the service without access to source code, documentation, or through network traffic inspection. When properly defined, a consumer can understand and interact with the remote service with a minimal amount of implementation logic.

Or maybe you know Swagger, so what’s the difference? Check it out here: Differences between Swagger and OpenAPI.

So your backend colleague gave you the endpoint of their api so you can start integrating your web application with some real data. So what will be your next step? You’re quite a Typescript enthousiast and want to make sure that your web application has some type safety, so you start typing out some TS interfaces that we can use. Okay, check ✅. Next step? Maybe add some abstraction and reusability to your stack? So you create an Angular Service that uses the HttpClient and so wraps the actual endpoint. Sounds good and eventually this will be a good approach. But it feels a bit repetitive to do this for every project again. Besides that, I think you can spend your time better on building actual features for your application, right?

So what if we could automate these steps to save some precious time 🧐? In a few steps we can generate Angular specific code based on our OpenAPI spec. Let’s get started 👨‍💻!

First install the Angular CLI if you don’t have this installed already:

Start with a new angular app and choose the default options:

Start the application to verify everything went well:

A well defined api comes with some documentation. An api built with OpenAPI comes with a yaml, or JSON, spec that describes the actual api. We can build this spec by creating a yaml file in our application. As I said before, you probably will receive this spec from your backend developer. But we will be creating our own for this tutorial. In order to have a real working api, we will use the well known JSON Placeholder public test api.

Add a file openapi.yaml to the root of your application and add the following content:

You can also download the file from the demo repo

I think that this kind of documenting is quite self explanatory, but let’s discuss a couple of things:

Curious about what the OpenApi spec has to offer? Check out the OpenAPI Specification

We’re going to generate our Angular code with the CLI of openapi-generator. We can install this via npm as devDependency.

This packages has a lot of generators available, we’re going to use the typescript-angular one.

Add a npm script to your package.json file for more convenient usage:

We use the default configuration over here. But you can customize this based on your needs.

One example could be the option removeOperationIdPrefix to prevent redundant method names. Take for example the following operationId in your spec:

The generator will use the operationId to determine the Angular Service name and the method name. If we use the default configuration, our class will look like this:

Using the arguments -p=removeOperationIdPrefix=true will remove the Posts_ part of the operationId: Posts_GetPosts

That already looks better to me! As I said, there are plenty of configuration options. And you probably will be using some of them from time to time depending on the spec you receive.

Next step is to actually generate our code with our custom npm script:

We now have the following directory structure because we told the generator to output (-o) to the src/app/core/api/v1 directory: 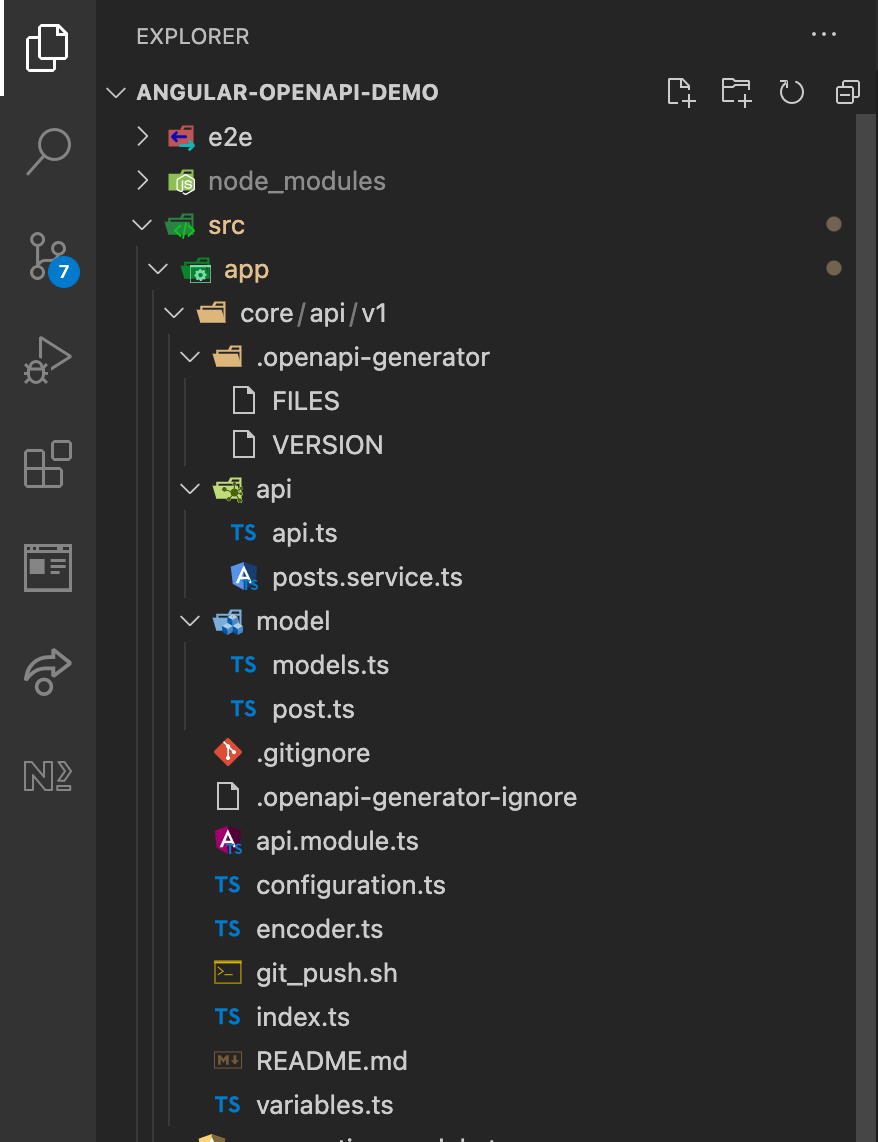 Use generated NgModule and services

The most important parts of the generated code are the following files:

Add this ApiModule to your AppModule. This will use the ‘default’ server endpoint that is available in your openapi.yaml. You can see that in the generated posts.service.ts:

If you want to override or provide a different endpoint, you can do this by passing in a factory function in the forRoot method of the ApiModule:

And we can go one step further by moving the basePath to the Angular environment files:

So now we can import the environment.basePath variable to configure our ApiModule.

We can now start using our generated services in our application! Change your app.component.ts to this:

And in your app.component.html we can use the posts$ variable by subscribing to it with the async pipe:

Your browser should now show you a list of Posts from JsonPlaceholder: 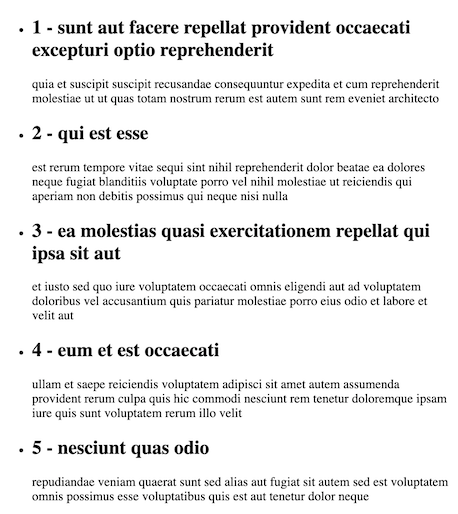 🎉 Done! That was all we needed to do to generate ourselves some Angular services and spare us some time.

In this example I’m generating and putting my code in my project’s repository. That’s fine for most of my projects because we’re using monorepos and also using client specific api’s. Another approach could be to publish your generated code as a npm package that can be installed by others. These steps are also described by the OpenAPI generator itself in the README. So it depends on your needs which approach fits better.

Now that we’ve generated our Angular services, let’s have a look at how we can utilize the OpenAPI spec even better in our front-end application stack! What we’re going to use for this is a great package called: OpenAPI Backend from Viljami Kuosmanen.

As Viljami describes it in one sentence:

OpenAPI Backend has a couple of useful features, but the feature that we’re going to use is the auto-mocking responses behavior.

The simulator project will be an independent project but within your current directory structure and so it will also be part of your git repo. So actually we’re going to create a monorepo: a single repository that contains all our code. I’m an advocate when it comes down to monorepos. If you want to learn more about useful tooling around monorepos, then you certainly should check out the following tools:

I’m not going to use any of these tools for the sake of this tutorial.

Let’s get started by creating a directory where our simulator will live and go to the directory:

Initialize a new npm project to generate a package.json file:

As you can see we’re using Typescript. We need a tsconfig.json file, which you can initialize with the following command:

We used the locally installed typescript compiler by running it via npx. It will run the tsc bin from your local node_modules because we installed it as our devDependency:

Open the generated tsconfig.json file and configure the output directory. Your file should look like this:

And the last thing we need to do is to actually create a simulator instance with the openapi-backend package. Do this by adding a file called index.ts to your simulator directory and add this content to it:

Registering the notImplemented handler that we will be using to mock the response is the most important part of this configuration. As the documentation states: The notImplemented handler gets called by .handleRequest() if no other Operation Handler has been registered for the matched operation. The mockResponseForOperation method will then mock a response based on the available example data.

Now run npm start in your simulator directory and open your browser on http://localhost:9000/posts to see some Posts🚀! The response should look like this: 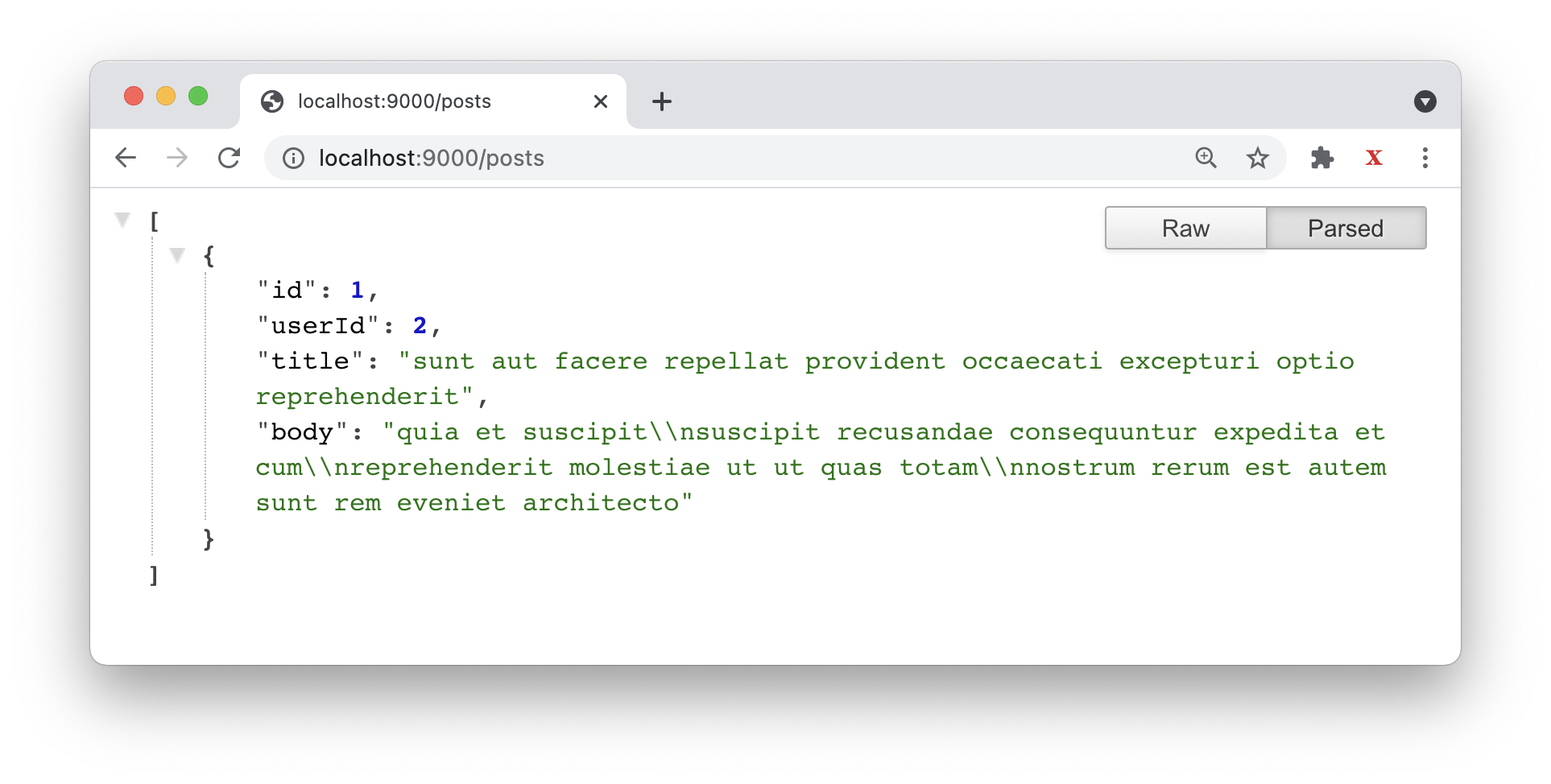 So where is this data actually coming from? Do you remember the example keyword that I mentioned earlier? That’s how we can return some useful response data to our requests. Here you can check out the official documentation about this example keyword.

Using the simulator in our Angular app

Now that we’ve our simulator project configured and running, we can use it in our Angular app. Open the environment.ts file located at: src/environments/environment.ts and change the basePath property to our local running simulator. You file should look like this:

This is the default environment file that Angular will use when you run the project with npm start or ng serve without any configuration parameters. You could add a specific environment configuration. Check out the official docs to learn more: https://angular.io/guide/build#configure-environment-specific-defaults

Angular applications already uses the npm start command to eventually run ng serve. We need to make some adjustmenst in order to start our Angular application and simultanously start our simulator. I really appreciate it, and actually expect it, when I only have to run two commands to start the project: npm i && npm start. Why? Nobody wants to have some superfluous starter doc that you need to read, handle mentally and do all kinds of set up tasks. To give your project a first good impression it should be ready to use within seconds! I’m not saying you should not have a README.md file, the opposite! The README file could describe other helpful information that your reader should know (e.g. different configurations).

So what’s the problem with the repo that we created along this tutorial? As a developer you now need to:

In practice this requires the developer to open two terminal windows/tabs and run the commands. Not a great Developer Experience if you ask me. We can do better!

So let’s assume that we always want to run against the simulator in the default configuration, so when running the npm start command. We need to be able to start two tasks in parallel. And maybe you’re already quite familiar with npm, but there’s a package for that called: npm-run-all.

Install it as a devDependency in the root of our project:

Now open the package.json of our root project and alter the scripts section and make it like this by adding two scripts and changing the start script:

I guess the scripts do explain themselves, but here’s a brief description:

Running the npm start command from the root should now start our Angular app + start the local simulator! Do not forget to update your README.md file with a sidenote about this behavior.

You might have noticed that our simulator only returns a single record on an endpoint that could return multiple records. This is fine for some situations, but sometimes you’re developing a new feature that incorporates a list of items, or Posts in our context. Returning a single Post will not help you very much if you want to see how your list is working when multiple items are in it. Think about applying staggered animations on lists, filling the available space etc. In this situation the example data is not sufficient for our use case. What we can do is providing specific handlers for our OpenApi operations. A simple example for our Posts api is this:

You should add this to your simulator/index.ts file before app.init().

This way we created our very own response for the endpoint that is described in our api spec file. Great for developing and testing purposes if you ask me!

When you are going to provide or ‘override’ multiple endpoints, make sure that you keep your simulator code maintainable: so splitting up custom handlers in separate files and keeping your index.ts file clean.

The OpenAPI spec is already very helpful to describe your api’s. I showed you how I utilize this spec to generate code in our Angular application and generate a simulator that we can use for development purposes. What I did not describe is how I use this same simulator to act as an api for my integration tests that I run with Cypress. Another great use case for your OpenAPI spec!

So, what else could you do with it? Let me know!